Turmeric, from golden spice to remedy.

“Golden spice” – it owes this name not only to its colour but also to its versatile modes of action. But what is turmeric anyway?

The spice is extracted from the root of the turmeric plant, which is native to India and other South-east Asian countries. For over 5,000 years, it has been considered a sacred plant due to its healing powers and has been used for thousands of years in both Indian Ayurveda and traditional Chinese medicine. On European soil, the root was first known only as a spice. The effects of curcumin on health have been studied since the mid-1950s.

Turmeric owes its healing effect to the active ingredient curcumin, which is also responsible for the yellow colour of the root. The active ingredient provides relief for a wide variety of complaints, for example, curcumin is anti-inflammatory, helps with pain, digestive problems or also complaints relating to the nervous system. Turmeric also works wonders for colds.

Turmeric promotes digestionby stimulating the production of gastric juice, among other things. It thus provides relief for a persistent feeling of fullness due to slowed digestion or also for flatulence. Due to the stimulated production of digestive enzymes, the body can break down the food it receives more easily and quickly, which is why it can be better absorbed and utilised by the small intestine. 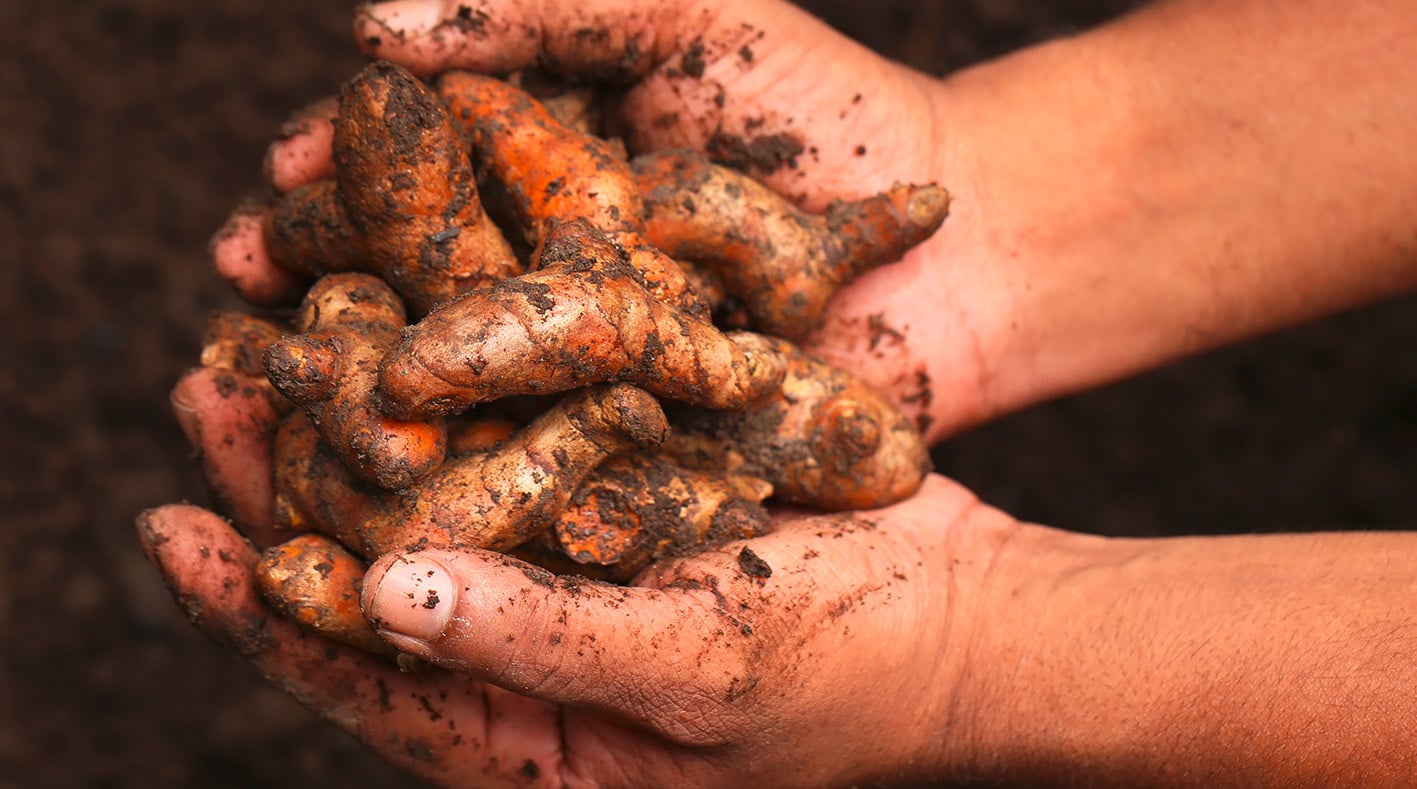 Researchers became aware of turmeric in this context because it is very often used in India for seasoning food and hardly any cases of Alzheimer’s disease, for example, have been recorded there. It is assumed that diseases of this kind are triggered by fragmented proteins in the brain. Due to the antioxidant effect of curcumin, these can be removed and the impairment of brain performance is counteracted.

Curcumin is also known as a strong anti-inflammatory substance.

This effect is also noticeable in diseases such as arthritis or rheumatism. In these cases, inflammatory-degenerative processes take place in the body, which often shift to the joints, severely restricting their mobility and causing considerable pain. With the help of curcumin, these inflammations can be counteracted so that the complaints decrease. It is now even recommended by the World Health Organisation (WHO) for the treatment of this type of disease.

Increased bile flow can also be achieved with the help of Curcumin. Thus, both bile complaints and liver diseases can be alleviated. The substance counteracts the formation of collagen fibres within the liver, which can cause scarring in the organ. Curcumin is anti-inflammatory and also strengthens the immune system. Therefore, it offers the liver additional protection against diseases.

Unfortunately, it is not that simple. Nevertheless, more than 3,000 studies have so far confirmed that the active ingredient can make a positive contribution in the treatment of various types of cancer. Due to its antioxidant effect, it can inhibit the development of new cancer cells or even prevent them by preventing pre-stressed cells from mutating. In addition, it helps to make the membranes of the diseased cells more permeable, so that the absorption of active substances, which is carried out as part of the therapy, can be improved. Curcumin is therefore quite helpful in cancer and an accompanying intake makes sense. Curcumin is fat-soluble by nature.

An insider tip is to take turmeric with honey.

The combination of these two substances is considered a true miracle weapon against pain, a weakened immune system or even weakened organs. In addition, the mixture has a calming and also detoxifying effect, which is why honey with curcumin provides enormous relief for colds.
Simply add a few drops of Biocannovea Curcumin to your tea with honey.

We hope you enjoyed reading! See you soon, your BIocannovea team.